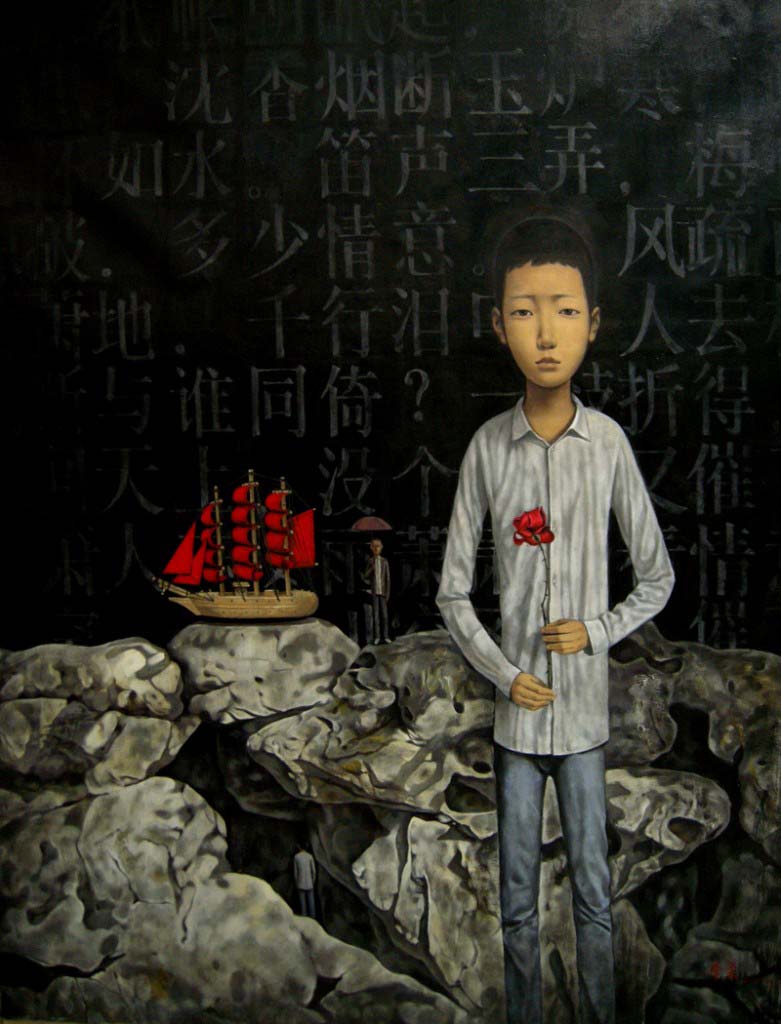 Thoughts and images, real and imagined, pervade the palette of Li Liang. A young Chinese painter working exclusively with oil on canvas, Li resides in the industrial city of Zhengzhou.  Although not far away from the famous Kung Fu training sites of Shaolin, Zhengzhou is nevertheless worlds apart.  For those who have visited Zhengzhou and felt its energy, many of Li’s pieces incorporate a hazy yellowish brown wash throughout which reminisce of his city and lay across a great body of Li’s works. Beneath and within the images, as it were, the sense and sights of the place he calls home is ever present.

It seems fitting that Li’s place of work finds its way into his pieces because the pieces themselves all incorporate aspects of the visible seen world and intimacies from the world of the mind.  These intimacies are captured in often dreamlike quality as both objects and fragments throughout Li’s canvas.  His is a Eastern world of Magical Realism. 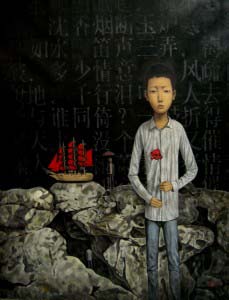 Magical Realism is an oft cited genre of Latin American fiction that incorporates the story of real world people with the psychological and even spiritual goings on as real life dramas play themselves out amidst many more than three dimensions.  This is not fantasy literature but instead an attempt to portray true reality.  Many have experienced the sensation of a memory coming to the fore with a whiff of some food cooking or alongside the timely playing of a song on the radio.  The smell or the sound transports a person back to a beautiful or even terrifying moment long past.  This is because human perception of events is forever locked with the thoughts and emotions and sensory perception of smells and sound that all occur simultaneously with the event itself. Schools of deconstruction in the 1970’s focused on this to demonstrate that no two people understand a concept the same way and therefore the reality of life and understanding of ideas is necessarily unique for each person. Magical realism accepts that thesis freely but instead as a true reality that incorporates all realms of being into a whole, including those realms not so easy to see with the eye. Far from concluding no one can know true reality, a magical realist will more likely say that true reality incorporates things many objectivists would not consider real.  Magical Realists are not interested in demarcating how people are separate from each other but instead how reality, all realms of reality, harmonize to depict something truly real. 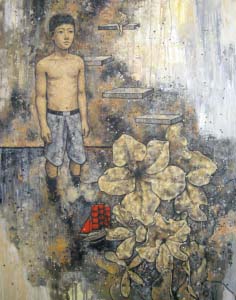 Ironically Magical Realism did not begin with Latin America but instead was a turn of phrase to describe the interwar German school of painting called the New Objectivism by its practitioners during the Weimar Years.  It immigrated to Latin America in the 1960s and 1970s and onto the pages of authors like Isabel Allende and Gabriel Garcia Marquez; and now, it has most recently immigrated onto the canvases of Li Liang.

Different subgenres of Magical Realism are often cited.  One focuses on a kind of hyper realism or absurdism in which very realistic images – so realistic they can seem fake – appear in contexts that seem out of place or just ridiculous.  Another subgenre can incorporate a real image like a boy with all the perceptions and thoughts inside the boy’s mind surrounding him as if they are just as real and present in form as he is.  Blurred images as of things not quite in focus are also common.  All are an attempt to portray the truly real or that which may be called deep realism.

Across all incarnations of Magical Realism is also the presence of loss.  The images or subjects outside the real world are just as likely to be of what is lost, what never was, and what might have been.  The passage of time brings into presence events that have happened but the real world of the mind includes a different real world that might one day be or has one day in the past really to have been dreamed of.  Absence is as real as is presence and magical realism captures both.

Li has actively explored each of these methods of expression to incorporate that which is not usually seen with that which can always be seen. 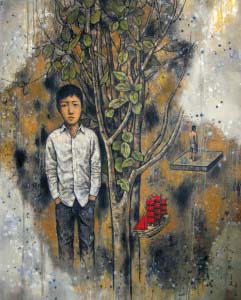 Li’s earlier works often focus around the image of a young boy or sometimes several.  Most often portrayed with an inscrutable expression and arms dropped to the side as if helpless, the rest of the canvas is devoted for the most part to the things of the boy’s mind or the feelings given form from his heart.  These works begin with years when Li was even younger than he is now.  The early pieces often include many Chinese characters written on the wall directly behind the boy.  This is fitting because the first few years of education for young Chinese boys and girls is given mostly over to memorizing and writing as many of the forty thousand Chinese language characters as is possible.  It just makes sense that the canvas of the young boy’s mind is given over to the writing of these characters.

Most of these images of the real boy remind one of the “My Family” series of works by artist Zhang Xiaogang. Indeed, the reference is clear but the direction Li takes with these pieces is entirely his own.

As his work progresses, Li’s themes begin to focus on the same boy but this time with images of toys, particularly a ship with red sails, as well as additional images of the boy sitting or reflecting in an inward manner.  While the first pieces including Chinese writing might have been perceived as a realistic portrayal of the walls of the room around the central subject of the boy, these new pieces leave no room for doubt that the viewer is seeing not a picture of what is real but a departure into the magical pictures of parts of a greater reality. Moving into this next stage there is also notable progression of technique with these new pieces.  Instead of clean pictorial images in paint, the medium becomes part of the magical reality.  These new images portray lines of dribble as in a more abstract contemporary image.  The paint drools its way down the canvas or cakes in spots.  The effect achieves a grittiness and even dustiness that prior pieces did not include.  One is again reminded of the streets of Zhengzhou.  Has the magical realism of the pieces progressed beyond the boy and what is in his mind to include the artist, the medium, and the city in which the artist paints?  The image has become more comprehensive to include even the artist and the paint.  This stage of Li’s work continues to be one of the most sought after and while he does continue to some extent with these sorts of pieces, most recently he has explored three new directions concurrent with each other. 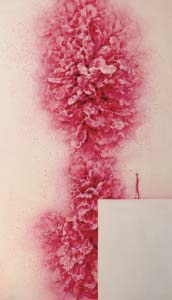 First, and most provocative, a group of his more recent pieces may be called his color phase.  As color is associated with emotion these images have become bathed in a uniform color tone.  They are more abstract and the central image of the boy is now sublimated into a much smaller and shadowy stick figure, most probably that of a man. “My family” becomes “Giacometti at a distance”. This series of pieces most often is bathed in red tones or pink tones. Flowers loom larger and people lay small. In some ways these pieces remind one of a Chinese traditional ink painting done in modern style with oil. Some of these pieces also display a geometric structure not previously seen with Li.  This color phase has found its way into four tonal qualities thus far: red and pink, gray, sky blue, and a lemon orange tone. 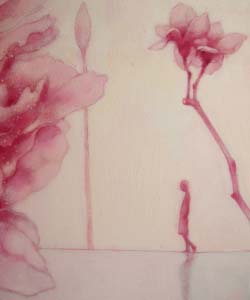 Li’s second direction of exploration lately is into a color tone dominant extension of his previous magical painting genre.  Subjects have grown larger with a much greater presence of female figures and the things of the mind of a woman.  Childhood has past into manhood. Sexuality is much more present and themes of isolation less redolent.  This forward movement of the main body of Li’s thematic work has withdrawn the dominance of the medium returning to a style again more focused on image and less eager to an announcement of technique.

Lastly a particularly provocative exploration is also evident.  These images are almost hyper realistic but set into a completely infeasible context. Birds, people and various subjects are present in pieces that play so intensely with themes of realism that they court the border between classic and kitsch. This is a very daring move for Li and presages the emergence of future forms and blending of forms that are as yet only known inside the realism inside the mind of the artist himself.

Li Liang’s magical reality is working itself out on canvas through the passage of time.  The thematic elements of his pieces are growing and exploring and not so much changing as evolving.  One of a group of young Chinese artists exploring these themes of the ‘really’ real, his career his progressing towards a time of influence across his medium and amongst his peers.