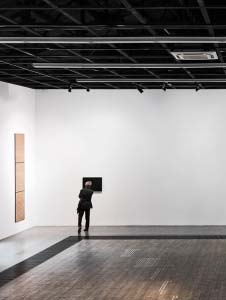 It can be said of discovery that it is not so much the finding of something new but remembering something that is known but somehow rests un-recollected. Did Columbus discover a new world or did he remind Europeans of a land long since forgotten? Is it in our nature to forget and then through discovery to remember again? Does the artist discover new things before our businessmen and our scientists? Or has the artist remembered something already that need only be converted into scientific equation expressing the same understanding in a different ‘language’ or ‘medium’? As Columbus sailed to ‘remember’ so it can be said that Fang Zhi Yong creates to discover what is now forgotten. And it may yet be that some of the discoveries in the pieces Fang is creating today will one day stir a memory for those working tomorrow in a different field and these discoveries will be called again by someone else by the same name, ‘discovery’. 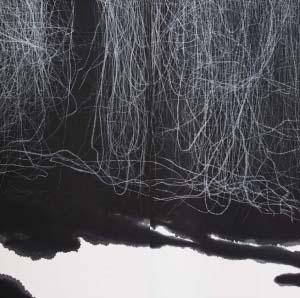 For Fang says, “each piece seems a new beginning when artists start their work, but the work always maintains something from his deepest mind that somehow it seems we could never have forgotten.” The process he speaks of has most recently become the subject of his latest series and sculptures. Memory involves both absence and presence. It is the action of unveiling something present in the real world but absent inside the mind. That which seems not to exist but instead lays just-hidden must through some form of action be rendered from nothingness into something. That which appeared absent now becomes present. For Fang the artist achieves this by rendering form in his own medium of choice. For the physicist the same knowledge may be calculated into an equation. And each means of expression for each discoverer may become an evolving set of discoveries according to the language of different disciplines. Each act of discovery reminds humanity of the unknown that has somehow always been known.

Discovery and play are closely associated. So, in his latest series Fang has turned to something deeply understood by adults during the growing stages of childhood – the jigsaw puzzle. Puzzles express discovery by making everything connect and fit together, a whole from the parts. They prompt presence with the tactile nature of the pieces. Because they provoke memory from a time that is younger they also invoke the urge of discovery in the manner of play. Play teaches children how to connect and how to construct. It engages younger minds in discovery by connecting what they can imagine with things they can do. The jigsaw causes the child to see the shape and use the contours to make the connection. For adults this never goes away but is always fallow in the mind, half forgotten but never outside of reach.

Fang’s recent series engages strong colors (reds, blacks, gold) and each jigsaw to inspire complex reflections on the nature of individuals and human groups. There is a piece missing – is it that thing forgotten – on the edge of the mind? Or is it the person who never quite fits into their group? Is the image whole without that person – that piece – or is a desire stirred to find that missing piece and finish the puzzle? By creating desire to make that connection and complete the picture what becomes discovered in the imagination?

But what of that missing piece and what of its absent color? Gold is a color for wealth in Chinese culture. Can we interpret the missing piece to mean that despite how much a group of people aspire to wealth and paint over different pieces to conscript their identity into the making of money, one member of the group will always be missing? Will one member of the group never quite fit in? Or should we interpret the piece to the representation of the mind of the businessman who, no matter how hard he conforms his personality to financial progress, something just doesn’t fit.

In some of Fang’s works many pieces are missing, sometimes appearing as a split right down the middle. Is this split the emergence of two groups of people in the process of creating different languages or different cultures? Are the people pulling away from each other and leaving a gap in between? Is this how cultures form, separate, and emerge as many? When looking at the black areas left behind by so many of these pieces one can almost see the earth and continents drifting apart. A major fault forms and soon the seawater will rush in. Soon, in geologic time, an ocean will divide the two bodies of land that once were one. Are we looking at people, or also at the earth itself?

Seeing natural processes inside the jigsaw are not a surprise. Fang began a series of stages of his own growth in graduate school by engaging nature and discovering the set of images that emerged. He reflected on and reconnected with the forms of the trees, the field, the rocks and stones. The medium he chose to express that which he discovered in nature was also a path to remembering his roots as an artist of China; the roots of all Chinese art. Fang chose rice paper rather than canvas but combined mixed media with ink. Embracing his modern identity as a contemporary artist by using materials in addition to ink but embracing his history as a Chinese artist by creating on rice paper, the multiple series did not attempt to be directly pictorial but instead visually referential. The forest became a long thin series of layering in soft greens and browns. More as if sections of rings from a tree than a traditional image of trees flowing with leaves in harmony, the beauty of the images create a newly discovered comprehension of one the five Chinese elements – wood.

No less willing to express rather than depict, the stones of the earth became bathed in colors of the sunset and intensities of minerals. Abstract forms on rice paper reveal purples and silver and mauve using ink integrated with mineral content. Two additional Chinese elements appear from one of these creative works, mineral and earth. One feels as if one gets to know the rocks even though there is no pictorial representation of any one rock present. As if Fang had gone to the woods and sat with the rocks and sensed the secrets they withheld, he discovered a new understanding of nature and a fresh way to visually express its presence.

With earth, mineral and wood, Fang began his journey into nature by walking alongside three of the five Chinese elements. But nature evolves from nature. The continents drift and so too do people. Missing pieces of the mind and missing people from the group are not unlike the gap between the continents. As such gaps grow, all could eventually come to water, drowning, and isolation. Or, something new could be born. Water, the fourth element, may be the pieces forgotten in this motion inside the puzzle. One may ask if the gold painted puzzle can ultimately survive the one piece, the one person, who remains left outside the whole? Is the color gold only temporary and will a rich variegation of colors emerge as the pieces reposition? 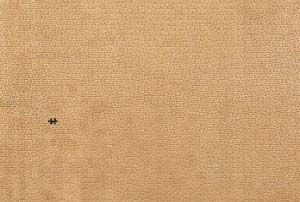 Recognizing the unknown, the absence amidst the presence, Fang has journeyed beyond the woods and further into what may not be easily seen but what can be heard. He represented the visual references to wood and rock, but what of their sounds, another missing piece in a visual portrayal? In the series “The Imaginary Lines of Chopin” he wrestled with how to express sound in visual form. It was not until he relaxed one evening by listening to the music of Chopin that he discovered the relationship between what can be heard and how it may be seen. In this series, musical form is expressed in the movement of strings. Some are peaceful and synchronized while others are noisy and divergent. Again choosing rice paper as his medium he holistically embraced his own identity along with the nature he was depicting.

But was not one’s own identity also a part of nature? Depicting rocks and wood maintains a relationship of separateness between the artist and subject. Sound challenged the understanding of visual medium with that part of nature which cannot be seen.   But the need to go deeper presented itself. The artist himself is also nature and when the artist expresses he does so from both that which is understood and that which is as yet unknown but can be remembered. When the artist paints, he finds both known and unknown. But he may also omit things that must become present.

It may be said that it is in the artist’s nature to create. But the artist is part of nature too. Fang has chosen to begin with nature by painting from nature. And so Fang, in his own evolution, journeys us through our stages of growth to explore memory, understanding, the presence and absence of people into groups. What have we remembered? And what did we choose to forget?

From stones to strings to jigsaw. The game triggers a childlike wonder of discovery. But Nobel prizes and mathematicians also know that games are far more complex than they may appear. The theoretic aspects of game theory are no child’s play. This stage in Fang’s evolution has progressed an understanding of nature by exploring human nature from one of its simplest vantage points. The child playing a game. The rock with a flash of mineral. The wood with rings in its tree. The music with vibration in its strings. Fang is painting from nature and creating his discovery in accord with his own nature. 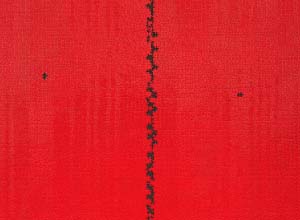 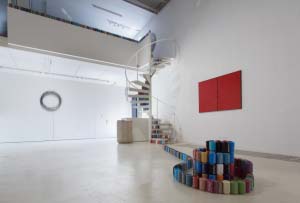 Wolfgang Pauli, the Swiss physicist, spent many years reflecting on and dreaming about the beauty of rose windows in the larger cathedrals of Austria, Switzerland, and Germany. These windows were inspired by spiritual sentiment and crafted into Mandela image forms by the great artisans of their times. It was in these visual expressions that a spark of memory arose for Pauli. After many years the patterns in these forms manifested themselves into the equations of Pauli’s Exclusion Principle – the work that won him the Nobel Prize. A discovery of spiritual understanding had become another discovery of beauty and balance that had itself become an artisan’s discovery expressed in form in the rose window. And the form of the rose window had become another discovery; this time in the form of the equation now remembered in Pauli’s Exclusion Principle. Modern science was now transformed by the form of the physicist’s medium of expression, his paintbrush, the equation. The Exclusion Principle was discovered with the help of the rose window and now can be said to be remembered with the discovery of Pauli. The stages of discovery can be traced as an evolution of remembering. Fang Zhi Yong is currently discovering the dynamics of forgetting. For the puzzle piece that is excluded in Fang’s painting, what may its inclusion mean for human evolution and our growth from nature, not to mention the nature of our growth?